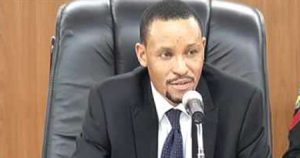 The Senate Committee on Ethics, Privileges and Public Petitions, has asked the Chairman of the Code of Conduct Tribunal (CCT), Danladi Umar, to respond to a petition levelled against him over alleged assault with two weeks.

Recall that Umar was spotted in a trending video slapping and kicking a security guard named Clement Sagwak following an altercation between them over the space where the CCT chairman parked his car on the premises of the plaza.

Umar, however, in a statement denied assaulting the security guard.

The Tribunal insisted that it was Umar that was assaulted by “some miscreants” who gathered at the scene of the incident.

Sagwak had petitioned the Senate, alleging that he was assaulted by Mr Umar and a policeman attached to him after he informed him (Umar) that his car was wrongly parked at Banex Plaza, Wuse 2, Abuja, on March 29.

He said the CCT boss slapped him severally and forced him to kneel down while undergoing his lawful activities.

The CCT chairman, who appeared before the Senate committee on Tuesday, asked the panel to give him one week to study the petition, which he said was just served on him.

This, he said, was to enable him respond appropriately.

Chairman of the Committee, Senator Ayo Akinyelure, asked Umar to reappear before the panel in two weeks time.

The Enemies Of Nigeria Are Within Its Leadership – Apostle Suleman