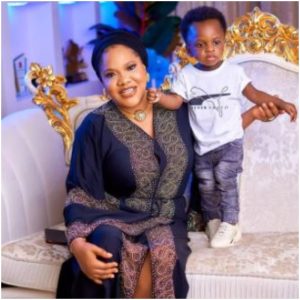 Nollywood actress Toyin Abraham has been left in tears after her son, Ireoluwa chose his father, Kolawale Ajeyemi, over her in a TikTok parent challenge.

The actress who recently announced she’s back on the microblogging platform via her official handle lamented bitterly, stating that children will disgrace you.

This comes after the Nollywood actress and her husband, Kolawole, participated in the viral parent challenge, which requires both parents to hold their child and run in the opposite direction. Whoever the child runs after, the child chooses over the other parent.

To the actress surprise, her son ran in the directions of her husband countlessly. The actress who seemed pained by her son’s choice could be heard saying, Ire come commu,I am the one that gave birth to you.”

Sharing the video, the actress wrote; ‘Children will disgrace you’

The Father Of Toyin Lawani Is Dead