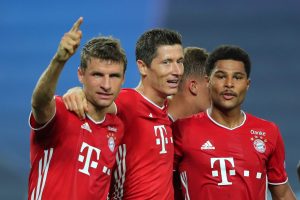 Bundesliga side, Bayern Munich has revealed its plan to adopt only digital ticketing to fans in the coming season.

Naija News understands due to the emergence of the COVID-19 pandemic, all home games at Bayern’s Allianz Arena stadium were played behind closed doors since March 2020.

However, the top tear club has revealed that once fans are allowed to resume watching home games live next season, issuing of paper tickets would be stopped and ticketing will be done digitally.

Dreesen claimed that by stopping the use of paper or plastic for tickets, Bayern can also eliminate “around 350,000 printed letters that were previously sent by post”.

Naija News understands that Bayern should be confirmed Bundesliga champions for the ninth straight season coming Saturday, with three games left and seven points clear at the top of the league table.

Meanwhile, European football ruling body, UEFA on Monday announced that the final of the Europa League in Gdnansk later this month will be witnessed by 9,500 fans in the stadium.
UEFA in its statement noted that the decision was reached following an agreement with Polish authorities.

Neymar hits post, crossbar and is denied by brilliant Manuel Neuer – but Paris Saint-Germain get past Bayern Munich in pulsating Champions League tie