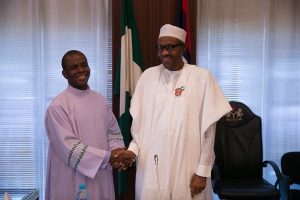 The All Progressives Congress (APC) has admonished the Spiritual Director of Adoration Ministry, Rev. Fr. Ejike Mbaka to focus on his spiritual calling and leave politics for the politicians.

The APC Deputy National Publicity Secretary, Yekini Nabena made the call on Friday in a reaction to Mbaka’s call for President Muhammadu Buhari to resign over the growing insecurity in Nigeria.

It will be recalled that Mbaka earlier noted that President Buhari has failed the country woefully, hence he should resign or face impeachment.

However, Nabena submitted on Friday that Mbaka shouldn’t be making such statements capable of destabilizing the country.

He further threatened to expose Mbaka’s ‘dirty secrets’ to the Vatican and the Pope if the priest doesn’t stop levelling accusations against Buhari and other political leaders in the country.

“One would wonder who Father Mbaka is emulating because the Lord Jesus Christ did not threaten to bring down the government during his own time, in fact, Jesus Christ obeyed and honoured constituted authority. That’s why he paid his tax.

“We are calling on Father Mbaka to concentrate on his spiritual calling and stop speaking like politicians who it is obvious he (Mbaka) has been dining and wining with. If Mbaka has found another political ally, it is better to leave a political message for politicians.

“Calling on President Muhammadu Buhari to either resign or be impeached because of the current challenges is ungodly. Father Mbaka should not, however, take his luck too far because there is a lot to tell the Vatican and the Pope about his person and his sources of inspiration”, Nabena said.

Rather than make toxic statements, Nabena urged Mbaka and other clerics to follow the example of Jesus as well as other respected clergymen and pray for the peace of the country.

He urged them to also “emulate the likes of Pastor Enoch Adejare Adeboye of the Redeemed Christian Church of God RCCG and Pastor WF Kumuyi of the Deeper Life Bible Ministry and many other true men of God who will rather fast and pray to avert a crisis in the country instead of threatening the government of the day”.

Meanwhile, a former aide to ex-president Goodluck Jonathan, Reno Omokri has warned the catholic church to sack Fr Ejike Mbaka before he disgraces them totally.

Omokri accused Mbaka of making statements capable of confusing people and which falls below expectations of him as a clergyman.