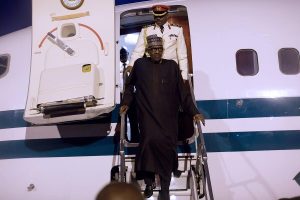 Meanwhile, the Inspector-General of Police, Usman Alkali Baba got an angry reception from Lagosians upon his arrival in the state on Wednesday.

It was gathered that the Lagos State Police officials blocked the Oshodi-Lagos Airport Road and Maryland-Ojota axis of the Oshodi-Anthony Expressway to allow free movement for the IGP and his entourage but this didn’t go down well with the road users who were stuck in traffic.

Speaking in Yoruba language, many of the residents could be heard abusing the IGP screaming “thief”, while others shouted, “you will never do well”.