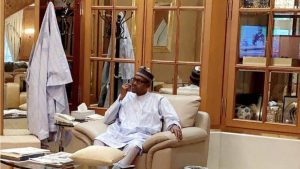 Nigerian journalist, Kemi Omololu-Olunloyo, better known as Kemi Olunloyo has alleged President Muhammadu Buhari is not in London as reported days ago.

Naija News reports that the controversial journalist took to her Twitter page on Sunday, April 4 to alleged that President Buhari is in Daura, his home town in Katsina State resting.

Olunloyo asked Garba Shehu, President Buhari’s Senior Special Assistant on Media & Publicity to disclose the ‘truth’ to former Presidential aide, Reno Omokri so he and his co-protesters can vacate the Abuja House in London, the supposed abode of the Nigerian president.

Olunloyo’s tweet reads: “President Muhammadu is resting in Daura, Katsina and y’all believe he’s in London. Who do you believe? Me or the MSM? “Garbage” Shehu pls tell Reno and company to go home now. Stop these games. Just like you won’t see the danfo Buhari again. You can’t “Fem” Shushing faceAdesina forever.”

Buhari is NOT in London. pic.twitter.com/l3Vcg6t0dQ

Recall that President Buhari’s personal assistant on new media, Bashir Ahmad on March 30th shared a video clip of the arrival of the president in London.

Naija News understands that President Buhari is not expected back in the country until the second week in April according to an earlier statement by his spokesperson, Femi Adesina on Monday when he announced the president’s trip to Nigerians, a report contrary to Olunloyo’s claim.