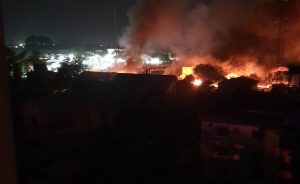 A correctional facility and police investigations department in Owerri in Imo State Capital were reportedly set on fire by unidentified attackers in an overnight operation on Monday, April 5.

Naija News gathered that reports on social media by witnesses said the attackers struck the prison and police department shortly after midnight, freeing a yet-unconfirmed number of inmates and suspects.

Heavy gunfire also rang through the area which is close to the Imo State Government House.

It was gathered that senior government officials have been reportedly asked to shelter-in-place.

Amnesty International said over the weekend that Owerri Correctional Centre had 2,156 inmates as against its installed capacity of 548 people.

When contacted by PeoplesGazette, the Imo police spokesman Godson Orlando said he was unaware of the violence, hours after reports had spread across social media with residents across different sections of Owerri reporting hearing heavy gunshots and explosions.

“I am just hearing it from you now,” Mr Orlando, a police superintendent, said during a telephone call at 4:48 a.m. “I will have to wait until later today to find out what happened.”

A spokesman for the correctional headquarters in Abuja did not immediately return a request seeking comments.

Just In: In the early hours of today, unknown Gunmen attacked and burnt down Police Command Headquarters, Owerri and the Owerri Prisons both facilities surrounded by Imo Government House.

Inmates are currently on the loose.