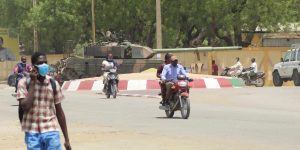 Chad has imposed curfew across the country and shut its borders following the death of its President, Idriss Deny, on Tuesday.

The military having announced the death of the longtime president, dissolved government and parliament and promised “free and democratic” elections following an 18-month transition period.

Naija News had earlier reported that the army announced that one of Deby’s sons would replace him as the head of a military council following the death of the leader who had ruled the country for three decades.

President Idriss Deby died on Tuesday at aged 68 of injuries while fighting rebels in the north of the Sahel country, the army said Tuesday.

The army had on Monday announced that fighting left some 300 rebels of the Front for Change and Concord in Chad dead, while FACT claimed in a statement that Deby had been wounded.

Deby “has just breathed his last defending the sovereign nation on the battlefield” over the weekend, army spokesman General Azem Bermandoa Agouna said in a statement read out on state television.

The career military man who seized power in the former French colony on the back of a 1990 coup had been declared re-elected late Monday with nearly 80 percent of the vote late Monday.

Ministers and high-ranking military brass had said Monday that Deby was in the region on Saturday and Sunday after rebels launched an offensive from rear bases in Libya on the day of the election, April 11.