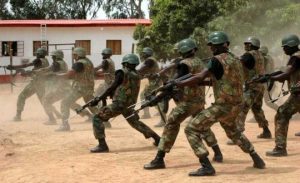 Troops of the Nigerian Military have killed at least seven Boko Haram terrorists in the Gwoza area of Borno State while many others were also wounded.

It was gathered that the terrorists were killed during a clash with the military on Sunday night after the Boko Haram fighters attempted to attack troops of 192 Battalion.

However, the troops responded with superior gunfire, killing some of them instantly while many others escaped with gunshot wounds.

“The Tango 9 troops responded rapidly, by engaging the terrorists with a high volume of firepower and instantly neutralised some of them, while others were forced to retreat.

“We have counted at least eleven corpses of the terrorists after exploring the general area. With the aid of heavy firing and mortar bombs, troops engaged them at their mountainous den,” the source told PR Nigeria.

About a dozen AK-47 rifles, anti-aircraft guns, motorcycles, as well as several other items were also recovered from the terrorists.

Meanwhile, the proscribed Indigenous People of Biafra (IPOB) has denied media reports that it was responsible for the attack on Imo Police Headquarters and Correctional Centre.

Naija News had reported how gunmen attacked the two government facilities, razed their operational vehicles, and freed over 2,000 inmates.

But in a statement on Monday by its Media and Publicity Secretary, Emma Powerful, IPOB said the attacks were not carried out by operatives of Eastern Security Network (ESN).

He warned those linking IPOB and ESN to the attacks to stop because the group was formed on the principle of peace.

The IPOB spokesman added that it is not the mandate of the group to attack security personnel or prison facilities.

Boko Haram Terrorists, Bandits Must Be Wiped Out – El-Rufai