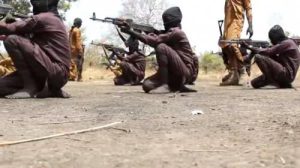 While two were shot dead at Government Technical School, Geidam, one was killed at a private residence.

The identities of the teachers were not revealed but witnesses told Daily Trust how the terrorists wreaked havoc on the town.

The insurgents reportedly made attempt to recruit young persons in the town.

Houses belonging to civil servants and politicians were set ablaze after looting of items that were reportedly distributed among the poor.

Telecommunication network was also disconnected, making it difficult for residents to reach out for help before they started fleeing in droves.

The terrifying situation compelled thousands of residents to flee their homes and seek refuge in neighbouring communities.

Residents disclosed that the insurgents were boasting to the locals that they will dislodge a military base located in the town. Troops have, however, put a strong residence even as they were being restrained by fear of recording too many collateral damages.

Chairman of the local government, Ali Kolo Geidam, stated that thousands of his people have fled the town and its environs.

“I don’t know who is presently in control because I couldn’t access the town for the past two days, but based on the information I received the insurgents overran the military.

“I visited some of the injured victims here in Damaturu Specialist Hospital and I sympathised with their condition,” he said.

He said the insurgents have slaughtered two people on Sunday morning including a teacher in Kawuri Primary School, Mallam Baba Tazira in addition to those that were injured with many others displaced.

The chairman refused military claim that they inflicted heavy casualties on the terrorists adding that they should have liaised with locals to get adequate information.

Another survivor who escaped to a neighboring village on Sunday, Rawana Usman, said he had no intention of leaving his house but later changed his mind when he learnt that the assailant slaughtered two Christians working with an NGO from his neighbourhood.