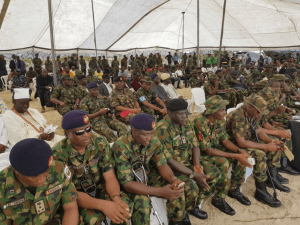 The Nigerian Army has reportedly recalled all its officers currently on study leave in civil institutions across the country.

A leaked memo by the Nigerian Army Headquarters, Department of Army Training, Abuja, dated May 11, said that the decision was taken to tackle the intensified insurgency in the North.

Naija News reports that the memo was signed by Brigadier General I. A Ajose on behalf of the Chief of Army Staff, Major General Ibrahim Attahiru, and titled, ‘Exemption of Ex Boys (NMS) from Personnel Affected by Directive on Suspension of NA Sponsorship to Civil Institutions.’

The memo was referenced AHQ DA/G7/230/164 and addressed to the Ministry of Defence, Office of the National Security Adviser, Defence Headquarters, and Nigerian Defence Academy.

The memo also stated that the soldiers were asked to return from leave following the shortage of personnel to fight rising insurgency across the country.

It added that the Nigerian Army also suspended the sponsorship of personnel in civil institutions with the exemption of students in the final year.

“References A-C conveyed directives for the recall of all NA personnel studying in civil institutions as well as the suspension of NA sponsorships, with the exemption of final year students. Consequently, I am directed to respectfully inform you that the directive does not include Ex Boys (NMS). Grateful (sic) treat and acknowledge,” the memo stated.

It is however unclear whether the recalled personnel will be deployed for administrative purposes or combat operations in the war front.