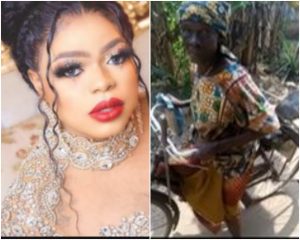 Popular, controversial Nigerian crossdresser, Bobrisky has responded to the allegations laid on him by the grandson of the viral older woman he promised to help.

Naija News recalls that Bobrisky won the hearts of many Nigerians some months back by pledging to fulfil the promise he made to a poor older woman who confessed her love for him.

However, the grandson of the viral older woman accused the male barbie of trying to sleep with him hence the reason he fled from Lagos with his grandmother.

Reacting to these allegations, Bobrisky, via his Instagram page, opened up about what transpired between the viral older woman, her grandson and himself, revealing he spent over 900k gross cost bringing them from Calabar to Lagos and catering for their housing and feeding until they went back.

He also narrated how the viral old woman and her grandson smoked on their first day at the hotel he checked in for them in Lagos.

Kaduna: Bandits Trying To Blackmail Us With Killings – El-Rufai