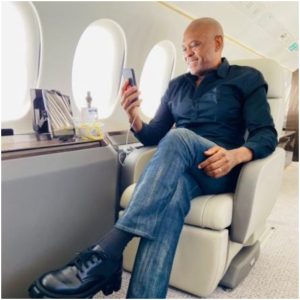 Nigerians on social media have been in deep amazement after philanthropist, and Chairman of United Bank for Africa (UBA) posted a throwback photo of himself.

The photo which has become a growing sensation since it was first shared pictured Billionaire Tony Elumelu during his rough and turbulent periods which he documented in pictures.

This came after he made a post on Twitter as he joined the ‘How it started vs how it is going’ social media challenge.

The tweet gained huge traction with over 53k likes as of the time of making this report.

Nigerians marvelled at how times have changed for the Harvard scholar, with many making funny remarks about his looks.

Tuface Idibia Mocked For Celebrating His Lookalike Son, Zion On His Birthday |Photo

Life Will Throw You A Lot Of Curveballs At Rocket Speed- Actress, Chika Ike Says As She Shares Throwback HBS Photos

Manchester United loanee Jesse Lingard could be Player of the Year contender after superb West Ham form, says Tony Cascarino, as comparison is made to Red Devils ace Bruno Fernandes