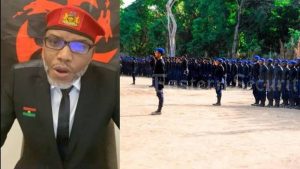 There was tension in Imo State as gunmen suspected to be operatives of the Eastern Security Network established by the Indigenous Peoples of Biafra (IPOB), allegedly killed northern traders.

According to a member of the Hausa community in the state, three northerners were killed in Orlu while the fourth person was attacked in Umuaka Njaba Local Government Area.

Speaking to SaharaReporters, he accused ESN operatives of carrying out both attacks.

“They (gunmen) opened fire on three Suya sellers in Orlu and another one in Umuaka Njaba. Those killed didn’t do anything to them. The ESN men just stormed their shops and killed them,” the source said.

“Enough of these senseless killing of innocent souls by IPOB security operatives. Even the police are not helping the matter; it seems they can’t do anything to these people.

“They (police) gave us a car in which we took their bodies and buried them. Since then, we haven’t heard anything from them.”

But DailyTrust reports that seven northerners were actually killed in separate shooting incidents in Orlu town and Umuaka in Njaba Local Government Area between Friday and Saturday.

An eyewitness, Harisu Umaru Ishiaku, said that the killers, dressed in Military uniform, stormed the Afor Umuaka market around 8:30 pm and attacked the victims.

Also speaking, the Imo State Coordinator of Hausa traders, Mallam Ibrahim Abdulkadir, the first incident happened on Friday when three Suya sellers were about to close for the day.

He said some gunmen in a Sienna car emerged suddenly and pumped bullets into their body.

He said, ”Actually this thing started on the second of this month. I was called that three people had been killed by some men operating in a Siena car. They were Suya sellers.

“Just as we were about to handle the situation, I was called again that four people were killed by the same people.”