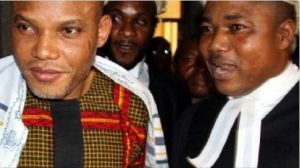 Ifeanyi Ejiofor, Nnamdi Kanu and the Indigenous People of Biafra (IPOB)’s lawyer, has narrated how security operatives attacked his home.

Naija News recalls that Ifeanyi Ejiofor’s residence was invaded at the weekend by armed policemen and soldiers.

In a statement on Tuesday, Ejiofor commended former Minister of Aviation, Femi Fani-Kayode,  who alerted him and stood by him during the attack.

He said, “I must deeply appreciate the untiring efforts of my client, friend and in-law, Chief Femi Fani-Kayode for defying sleep at that wee hour of the night when he got the SOS from me, to alert the world and those that mattered on the bloody attack/invasion of my peaceful home by those whose primary duty is to secure lives and properties.

“I want to specially thank my people of good conscience, particularly the members of my noble Association (NBA), the erudite President of the Bar (Mr Olumide Akpata) who was consistently checking on me and keeping touch at the hit of these turbulent hours.

“Very unfortunately, the well planned premeditated attack on my ancestral home resulted in the brutal murder of my long-standing personal aide, (Samuel Okoro, aka Gentle Biggy), who was shot and consequently injected with lethal substance before being set ablaze in my car, which the demons in uniform made away with on this black Sunday.

“But, be assured that I have more than enough evidence to demonstrate to the world that the uniformed invaders/assailants actually came to assasinate me and every living object in my ancestral home, unprovoked or the second time in less than two years, in the wee hours of Sunday, 6th June 2021.

“I had waited for 24 hours for those that invaded my home to tell the world their true mission to my peaceful residential home in Umunakwa Ifite, Oraifite, Ekwusigo LGA of Anambra State, but nothing is forthcoming. Hence, mine will be coming in stages as I had assured.”

He revealed that he was at his home town to honour the invitation of the Catholic Arch Bishop of Onitsha Province (Most Rev. Valerian Okeke).

“I honoured this invitation where His Grace raised a number of pertinent issues and consequently, commended me for my untiring efforts towards achieving peace in our region. His Grace prayed for me and equally offered further useful advise. We agreed for a formal meeting where major stakeholders will be notified and equally be represented. I left the Bishop’s court, but not until His Grace blessed me for the umpteenth time, and prayed for me and my friend who was in my company,” the IPOB lawyer said.

“I was in a deep sleep when the demons struck. The barking of my security dogs and sounds of gun in and around my home could simply tell me that there was danger and unusual movement in my peaceful home.

“Initially, I couldn’t fathom what the problem could be but what I know and can tell the public on this part of my press release is that they will hear it all with impeccable evidence to demonstrate the atrocities that were committed in my peaceful home by paid agents of darkness.

“I saw as it all happened, it was like a movie. I saw and overheard them directing my domestic staff who never resisted them in any manner to take them upstairs where their Oga was sleeping at the time, but my staff kept on telling them that ‘Oga is not in this house’. Shooting and heavy beating were simultaneously going on, the time was 2:30am in the morning. I saw Biggie on the ground being beaten and shot at, before somebody, presumably a medical doctor in their company, injected him with what I believe to be a lethal substance.

“The lifeless body of Biggie was dragged on the floor of my compound to my parked car. My driver who apparently was in possessions of my car keys at the time was ordered at gunpoint to produce to open the booth of the car where his body was dumped.

“Efforts by this band of murderers to access where I had hidden in order to finish the job for which they came proved abortive as they couldn’t breach the multiple bullet proof doors leading to where I took refuge. The native doctor they brought along with them, was armed with all sorts of charms and he was busy making incantations and directing them to where he felt I was.

“Midway into their murderous invasion of my home, their search for me was suddenly stopped and they consequently vanished with my harmless and innocent staff they abducted, including the lifeless body of Biggie. These evil men left my house around 3:45am having killed, vandalizmsed and terrorised my household for over an hour and 15 minutes.

“They stole my car and left my home along with over 15 Hilux vans, Toyota Hiace buses and Armoured Personnel Carrier, they came with. On getting to Okacha filling station in Neni, they dragged out my elder brother, Mr. Joel Ejiofor, who was equally abducted during the invasion and directed him to disappear from their sight.

“It was after my brother left, that my car was set ablaze with Mr. Samuel Okoro inside the car. He was not only killed by these soulless beasts, his body was burnt beyond recognition. I wish to ask those that directed this criminal and deadly invasion of my house, to tell me what crime Samuel Okoro committed.

“For the records, the late Mr. Samuel Okoro hailed from Ebonyi State and has been with me for the past four years. He was a brother, a dependable friend and a refined gentlemen. I will forever miss him.

“While struggling to control myself at this point in time, I am indeed broken and traumatised, not that I committed any offence known to law or that Samuel Okoro even did anything wrong, but because he was murdered in the most bizarre, barbaric, brutal and heinous manner.”

He continued, “The questions begging for answers which I want the invaders to answer are, who sent them to my ancestral home because they carefully monitored me until I moved in on that fateful day?

“I spent virtually a week in Abuja before returning home, why didn’t they arrest me in Abuja where I live or even invite me to appear before them for questioning if I was being investigated for committing any offence?

“Why my home for the second time? Why me? Who funded this bloody exercise? Who is actually after my life? Why the invasion of the residence of a Senior member of the Bar at such an ungodly hour of the night?

“From what I gathered, the sinister purpose is clear, the directive is clear, arrest him alive or dead and burn him alive. I will give further details on this subsequently.”

DSS Aware Of Pantami’s Sympathy For Al-Qaeda, Others – Ejiofor