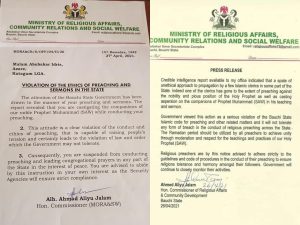 Bauchi State government has suspended an Islamic cleric for allegedly violating the state Islamic code of conducts and castigating the companions of Islam’s Prophet Muhammad (SAW).

Naija News understands that the government in a statement dated April 27, 2021, accused the cleric, Malam Abubakar Idris of inciting preaching and sermons.

Idris who is a resident in Azare in the Katagum Local Government Area of the state was accused of making statements that are capable of raising people’s tension and certainly leads to the violation of law and order which the Government may not tolerate.

The letter signed by Alhaji Ahmad Aliyu Jalam, the Commissioner for Religious Affairs, Community Relations and Social Welfare, suspended Idris from conducting preaching and leading congregational prayers in any part of the state in the interest of peace. He was admonished to abide by the instruction in his own interest as the security agencies will ensure strict compliance.

“This attitude is a clear violation of the conduct and ethics of preaching, that is capable of raising people’s tension and certainly leads to the violation of law and order which the Government may not tolerate.

“Consequently, you are suspended from conducting preaching and leading congregational prayers in any part of the state in the interest of peace. You are advised to abide by this instruction in your own interest as the security agencies will ensure strict compliance.

See a copy of the suspension letter as made available to newsmen below: 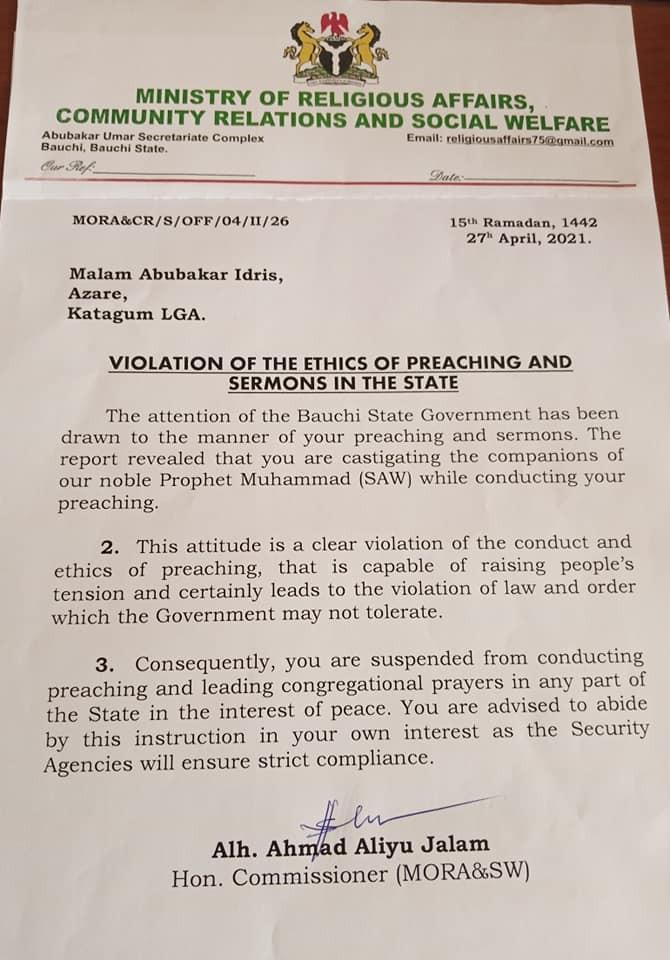 Naija News understands that the cleric’s suspension comes two days after the Commissioner noted with concerns the credible intelligence report reaching his office indicating a spate of unethical approach to propagation by a few Islamic clerics in some parts of the state.

Alhaji Aliyu Jalam explained that one of the clerics has even gone to the extent of preaching against the nobility and pious position of the Holy Prophet as well as casting aspersion on the companions of Prophet Muhammad (SAW) in his teaching and sermons. According to the commissioner, the Bauchi state government has viewed this action as a serious violation of the Bauchi State Islamic code for preaching and other related matters.

He further warned that the state government will not tolerate any form of breach in the conduct of religious preaching across the state. The commissioner urged all Muslim clerics in the state to use the period of Ramadan fasting to achieve unity through moderation and respect for the teachings and practices of our Holy Prophet (SAW).

Jalam also advised religious preachers to adhere strictly to the guidelines and code of procedures in the conduct of their preaching to ensure religious tolerance and harmony amongst their followers.

See the press released below: 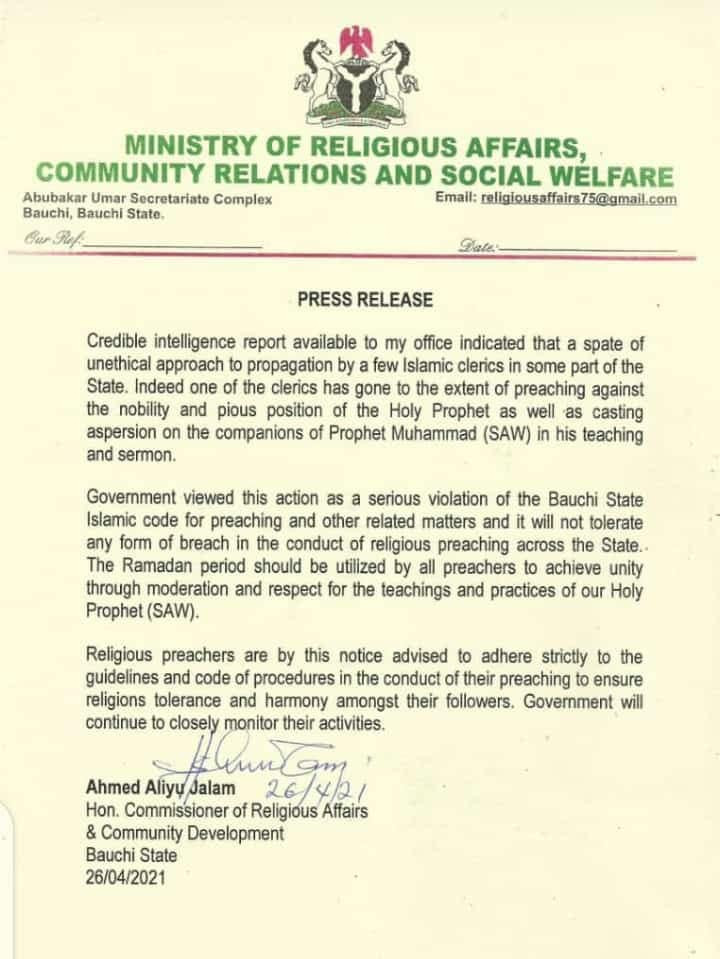 In another news, Miyetti Allah Kautal Hore has demanded the arrest of criminals killing Fulani herders in the South-East part of the country.

The spokesman for the group, Saleh Alhassan, stated this during an interview on Thursday, Naija News reports.

They're After Me — Borno Cleric Who Exposed Pantami In A Letter