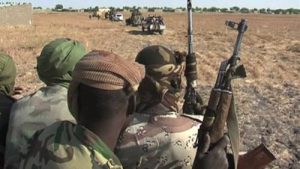 Residents of the community that spoke with Daily Trust, disclosed that the bandits are planning to kidnap staff of the college and people in its environs.

A resident of the community identified as Adamu disclosed that the bandits always surrounded the institution while terrorising the communities around the college.

“It is only Allah that has been saving us. They (bandits) have always rustled cows in our communities. Military operatives do engage them in gun battle anytime they come around, that is why we don’t have major casualties yet,” Adamu said.

The development was confirmed by the Commandant of the college, Air Marshal Olayinka Alade, on Wednesday in Abuja when he visited the Army Headquarters to brief Chief of Army Staff, Lt.-Gen. Attahiru Ibrahim, on the incident and other issues in the institution.

Alade said the institution has decided to launch impromptu searching and clearance operations in some communities where the bandits are operating around the college having informed General Officer Commanding 1 Division.

“There are some communities around the school that have developed and because it is as part of the college, maybe they are hiding under that cover, so some bandits are there. Because of that, there is a collaboration with other institution’s heads in the college. Constantly, we try to conduct an impromptu searching. We conduct search and patrol from time to time.”

“What we discovered now is that not too far ahead, some communities… it is like all these bandits have made all that place their aim, so I discussed with GOC 1 Div. From time to time, we need to carry out clearance operations.”

Alade added that the bandits also rustled some cows behind the college on Tuesday, April 13 – a development that led to a gun duel between them and the military operatives.

He, however, did not disclose whether there was any casualty, noting that he came to brief the COAS so as not to be surprised if he hears anything subsequently.

According to him, “In fact, yesterday (Tuesday), I was told that some bandits came to come and rustle some cows just behind us. There was an exercise that was carried out by the NACI. They actually encountered these bandits, they had to exchange fire during the exercise.”

“Those are the things we’re trying to ensure that we are not surprised if they have come that close, then, we need to sit tight and ensure we clear that place.”

Kaduna Student: Bandits Fed Us With Spaghetti And Fruits