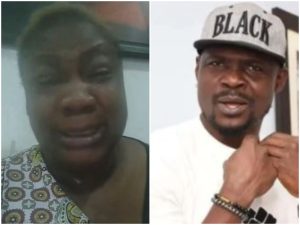 Nigerian Comedienne, Princess has said she never gave anyone permission to publish the CCTV footage of her 14-year old foster daughter who was allegedly molested by Baba Ijesha.

Naija News reports that the sexual molestation allegation against Baba Ijesha has caused division and controversies among movie stars.

The comic actor was arrested on April 19 by the Lagos State Police Command following the allegation of sexual defilement of a minor made against him by Princess, the foster mother of the victim.

Shortly after the seven minutes video of the incident went viral on Social media, Princess, through her lawyer, Ibilola Subair denied granting permission to any media platform to release the video.

“Our client (Princess) disclaims any liability or responsibility whatsoever that arises from the publication of the video on the internet or any other social media platform showing OLANREWAJU JAMES OMIYINKA (AKA. BABA IJESHA) molesting our Client’s foster daughter.

“Our Client expressly disclaims any liability whatsoever for any loss however, arising from the content of the CCTV footage released to the general public…” the statement read.

Princess had taken to her Instagram page last week Wednesday to narrate how Baba Ijesha ‘molested’ the girl, lamenting that some people are making efforts to disrupt the investigation process and force the police to grant bail to the actor.

Her post generated support from major stakeholders in the movie industry.

The saga escalated as popular Nollywood actors, Iyabo Ojo and Yomi Fabiyi, took to their Instagram accounts to throw jabs at each other over the case.

Meanwhile, a video has emerged on social media where Princess was asking Baba Ijesha why he sexually assaulted the young girl.

The actor was heard pleading for forgiveness, blaming the act on the devil.