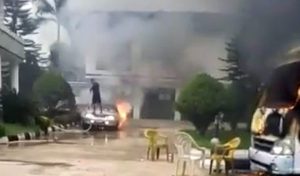 The Governor of Imo State, Hope Uzodinma, on Saturday noted that the attack on his country home in Omuma, in Oru Easy local government, is an attempt to tighten the people of the state.

Uzodinma while speaking in a broadcast to mark Workers Day in Owerri, he attributed the spate of attacks to the handiwork of those he described as disgruntled politicians who are afraid of his achievements in the state.

“Last Sunday’s attempt to burn down my country home was just their Lilliputian way of sending the message that Imo State is insecure.”

“As always, they failed woefully. The government in collaboration with all the security agencies is more than capable to protect the lives and property of all residents of the state.

“I swore an oath to that. I will never shirk this sacred responsibility.

“It is quite unfortunate that despite the impressive progress we have recorded in the first year in office, some people have failed to appreciate the glaring evidence everywhere that Imo State has taken a turn for the better.

“This group of fifth columnists has therefore elected to disrupt the peace of the state. Although their actions are quite regrettable, it is my duty as the Governor of the state to ask everyone to sheath the sword and make room for development.

“I must warn that the day of mindless criminality in the state are over. Let me use this opportunity to assure all Imo people that I will leave no stone unturned in ensuring the security and safety of all of us.

“Be rest assured that my administration is willing, able and capable of protecting the lives and property of all Imo people and residents alike. Without any fear of contradiction, I can declare to you that the recent security challenges in the state have been effectively contained.”

The Governor while speaking on salary issue in the state said that he has addressed the payroll system and workers are getting their salaries as at when due.

He added, “You will recall that after addressing the payroll system, I tackled the issue of welfare for Imo workers. Apart from ensuring that I secured a conducive working environment for you through rehabilitation of the Secretariat and provision of critical infrastructure therein, I saw to it that official vehicles were provided for Permanent Secretaries to ease their transportation problems. I followed it up by providing free buses for junior civil servants. These have been running religiously.”