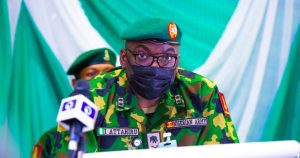 The Chief of Army Staff, Lt Gen, Ibrahim Attahiru, on Friday approved the renaming of Operation Lafiya Dole to Operation Hadin Kai, in the North-East.

The development was disclosed in a statement released by the Director Army Public Relations, Brigadier General Mohammed Yerima.

It read, “The Chief of Army Staff Lieutenant General Ibrahim Attahiru has approved the renaming of the ongoing Counterinsurgency Operation in the North East from Operation Lafiya Dole to Operation Hadin Kai.

“This is premised on the fact that the Nigerian Army has made a lot of progress over the years and needs to re-align for better efficiency.

“The renaming is in line with the COAS Vision of having ‘A Nigerian Army that is Repositioned to Professionally Defeat all Adversaries in a Joint Environment’.

“It is the belief of the COAS that the complete defeat of insurgency is a process that requires the participation of the entire nation using all elements of national power.

“He further assured that the NA under his leadership will continue to pursue the path of jointness in prosecuting the counterinsurgency war.”

North vs South: Protests Against Buhari An Attack On The North – Matawalle [Full Text]

No Civilian Was Killed In Benue Operation – Military

2023: I’m Not Responsible For Bags Of Rice Being Distributed In The North, But… – Tinubu