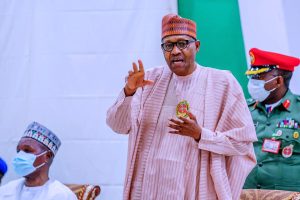 President Muhammadu Buhari has claimed that last year’s nationwide protests against police brutality were targeted at removing him from office.

Appearing live on Arise TV on Thursday morning, the Nigerian number one citizen alleged that the protests also dwindle the inflow of foreign direct investment to the country.

According to Buhari, those that took part in the demonstration ridiculed Nigeria as a nation and made it unattractive to foreign investors. When asked how he can improve foreign direct investment (FDI) to Nigeria, the president said: “This question was answered last year when there was the #EndSARS protest last year. You remember the young people that wanted to march here and remove me?”

The president added: “Tell the young people to behave themselves and make the country safe, then we can attract real investors to the country”.

Meanwhile, Buhari has said that all appointments under his administration are strictly based on merit and not on ethnicity or religion.
Buhari stated this during an interview with Arise TV on Thursday, Naija News reports.

Prominent people in the country have condemned the President for allegedly appointing more northerners in strategic positions.

The President said he cannot ignore seniority and merit for balance and federal character. The Nigerian Constitution states that major appointments and other privileges should be shared in such a way that it reflects Federal Character, that is balanced across the 36 states.