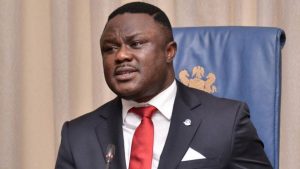 Governor Ben Ayade of Cross River State has approved the sacking of his Commissioner for Special Duties, Francis Etta.

Naija News reports that this brings to four, the commissioners that have been sacked by Ayade for refusing to join him in defecting from the Peoples Democratic Party (PDP) to the All Progressives Congress (APC).

A statement to newsmen on Tuesday by the Governor’s Special Adviser on Media and Publicity, Christian Ita, read, “The State Governor, His Excellency Prof Ben Ayade has approved the relieving of Hon. Francis Etta of his appointment as Commissioner for Special Duties with immediate effect.

“The Governor thanks him for his services to the state and wishes him well in his future endeavours.”

Other aides who decided to remain in the PDP have resigned voluntarily.

Why I Dumped PDP For APC – Ayade