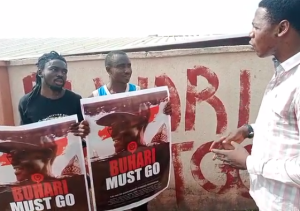 Naija News understands that the Kogi State Government arraigned the two protesters after they were arrested and flogged by youths for their demonstration.

In a viral video on Monday, the protesters who were holding “Buhari must go” posters, were physically assaulted and asked to eat the posters by thugs.

Reacting to the incident, the state government commended the youths in the state for arresting the protesters and handing over the men to the police

In a statement on Monday, the Commissioner for Information, Kingsley Fanwo, said the state government is behind the administration of President Muhammadu Buhari.

The commissioner also added that the anti-Buhari campaigners may be prosecuted for violating the state’s environmental laws.

Speaking to TheCable, the state Commissioner of Police, Ayuba Edeh, said he only knew about the arrest of people who vandalised public property.

“I don’t know. We didn’t arrest any anti-Buhari protester. We arrested people that were defacing public property,” he said.

“Because you know anti-Buhari protesters are all over the place every day, it’s normal and they’re everywhere. So they were arrested for defacing public property.”

When asked if the men were handed over to thugs by the police and tortured, he denied knowledge of that.