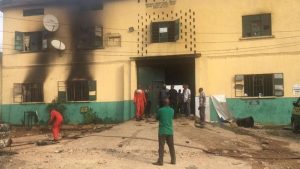 They also set free all suspects in detention at the station before setting the Police Divisional headquarters ablaze.

This is coming shortly after the federal government delegation which also included the Minister of Interior Rauf Aregbesola, had visited the state over the recent attack and burning of the police headquarters and correctional facility (prison).

A source who spoke on the incident said: “Gunmen this evening razed Ehime Mbano LGA police divisional headquarters. On arrival, the gunmen carrying guns freed the suspects before wrecking the havoc.”

When contacted, Imo Police spokesperson, Orlando Ikeokwu, told The Nation he had been not contacted or briefed on the incident.

Meanwhile, Governor of Imo State, Senator Hope Uzodinma, has asked police officers in the state to defend themselves against the members of the proscribed Indigenous People of Biafra (IPOB).

The governor spoke on Tuesday at the command headquarters in Owerri, during the visit of the Inspector General of Police, Muhammed Adamu, to the state to assess the level of damage done on the police facility by unknown gunmen on Monday.

Uzodinma also ordered police operatives to use their service rifles to defend themselves if they cannot attack the members of the group who also carry assorted rifles.

The governor asked the cops to be vigilant, take control, and ensure discipline in the state.