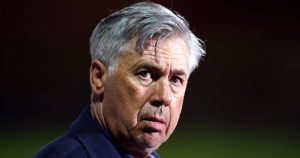 Recall that Ancelloti joined the La Liga side barely two weeks ago as a replacement for Zinedine Zidane who resigned from the club a few days before.

Ancelloti, however, believed Werner could fit in the list of forwards that could replace Karim Benzema for a long term deal. Naija News understands that the German international is enduring a difficult first season with Chelsea after he was signed in June 2020.

Prior to Werner’s move to Stamford Bridge, the 25-year-old had spent four seasons with Leipzig, during which he scored 95 goals in 159 appearances in all competitions for the Bundesliga club. Werner’s pace and movement made him one of the most exciting prospects ahead of the 2020-21 season.

He, however, won the 2020/21 Champions League with Thomas Tuchel’s side.

Meanwhile, a few changes have been made to the English Premier League Video Assistant Referees (VAR) ahead of next season.

Starting from next season, the top level of the English football league system will adopt the use of ‘thicker lines’ in matches to determine marginal decisions, Naija News understands.

Champions League betting offer: Liverpool vs Real Madrid – Get Reds at 9/1 or Madrid at 22/1 to win