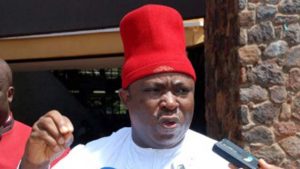 Naija News reports that the former APGA chairman declared support for Soludo when he received the ex-CBN governor’s campaign team at his Aguluzigbo home, in the Anaocha Local Government Area of the state, on Monday.

“I personally have the love for Soludo, since his journey into Anambra politics. He was to be the next governor after Mr. Peter Obi, in 2013, but because APGA believes in equity, fairness and justice, the governorship slot was zoned to Anambra North that produced Chief Willie Obiano, through my effort as the then National Chairman of the party,” Umeh said.

“Now that the party has zoned the ticket to Anambra South, where he (Soludo) comes from, I appeal to all card-carrying members of APGA to support and ensure that he wins the November 6, governorship election.

“Soludo, as an economist who has travelled globally in search of leadership knowledge and a former CBN Governor of this great country, Nigeria, I believe, he has all it takes to govern Anambra perfectly.

“As a political veteran, who has been in the system for more than 20 years, I think at this point, I should know who the governorship cap fits in the state.

“I am with my supporters for Soludo. There is no body language in this action.”

Attack On Soludo: I Will Not Abandon Families Of Killed Policemen – Obiano