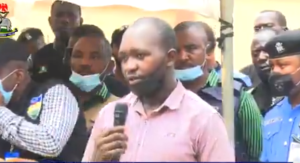 The Nigeria Police Force has arrested a gun manufacturer in Jos, Plateau State.

Confirming his identity when paraded at the police command, the suspect revealed his name as Michael. He explained that he is a resident of Jos South Local Government Area of the state.

In his confession, Michael disclosed that they were arrested by the police on 26 May 2021. According to him, the locally fabricated rifles which are equivalent to the known Ak47 that were recovered from him and his team were manufactured by him.

He explained further that he learned how to fabricate local rifles from his boss who is now working under him.

See the video below as shared by the Police force on its official Twitter page:

Meanwhile, a policewoman has been gunned down in Imo State by some unidentified gunmen.

Reports had it that the assailants numbering about seven invaded the Orji area of Owerri on Thursday, June 3, at about 05:30 pm shooting sporadically.

Naija News learnt that the gunmen started their operation from Orji axis before heading to Spibat area and visited other areas from where three persons were killed, including the female police officer and two men. An eyewitness who spoke with newsmen said the gunmen who wore black emerged from Amakohia axis on two vehicles, a bus and Hilux, walking the road with utmost confidence.

Three Gay Men Arrested For Having Sex In Benue |Photo

IPOB: 10 Arrested Over Killing Of Security Operatives In Akwa Ibom