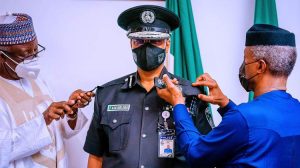 Naija News learnt that Adamu handed over to Baba at the Force Headquarters in Abuja.

Vice President Yemi Osinbajo on Wednesday, decorated Usman Alkali Baba with his new rank as the Inspector-General of Police.