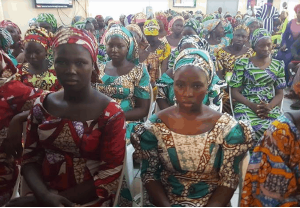 The released schoolgirls of the Government Girls Secondary School Chibok in Borno State, have been enrolled in a foundation course at the American University of Nigeria (AUN) Yola to prepare them for onward admission into degree programmes since their freedom in 2014.

The Vice President of AUN, University Relations, Dr Abba Tahir, disclosed that the foundation was started when former Vice President, Atiku Abubakar, offered a scholarship for 25 girls who escaped on the night of the abduction.

Tahir further stated that the former Minister of Women Affairs, Aishatu Alhassan, asked the university if they could accommodate them on a federal government scholarship.

The AUN management, however, could not give details on the progress of the girls at the school.

Meanwhile, in 2020, the Kibaku (Chibok) Area Development Association (KADA) had in a statement jointly signed by the National President, Dauda Ndirpaya Iliya and the Publicity Director, Manasseh Allen, said that 10 of the Chibok girls had withdrawn from the foundation programme at the AUN due to alleged lack of progress.

“Ten of them have out of frustration left the programme, they are Laraba Mamman, Mwa Daniel, Rachael Nkeki (who are now married), Saraya Yanga, Philomena Dauda, Sarah Nkeki, Asabe Lawan, Glory Mainta, Talatu Adamu, and Lydia Habila. They remain uncertain when they shall be writing their O Level final examinations, and so forth. In the school, they are isolated and not allowed to mingle, interact, and socialise with other students which would have been a means of learning, and continuous psychosocial therapy.”

According to him, sometime in August 2018, Maryam Wavi, Asabe Goni, Amina Ali Nkeki, Saratu Emmanuel, Rebecca Ishaku were literally blocked at the airport by the police and State Security Service (SSS) who handed them along with their parents to the Nigerian Immigration Services and detained them until they missed their flight.

“They were on full scholarships to study in the United States, with the full consent of their parents and proper documentation. After they missed their flight, the immigration services let them go,” they said.

Five of the students that spoke with Daily Trust, disclosed that became frustrated after spending four to five years in the foundation without the prospect of graduating as they did not yet qualify to sit for the SSCE, an exam they were taking when Boko Haram abducted them in 2014.

“We don’t know whether we are in primary or secondary school because it seems the programme has no end in sight,” one of the girls said.

“We had to protest the last term before we were allowed to sit for SSCE. Many of us failed but we are taking the exam again this year. Some of us got married last year and more are getting married in December,” she said.

However, another girl said she believed most of the girls were not good enough to make quick progress at the school, saying most of them had to start learning from scratch due to weak academic background having attended public school in the past.

“I think we are simply not good enough, this is a school where you have to speak English and understand all the subjects. It is not like a government school where you can graduate anyhow. So the girls want to just write their SSCE and move ahead with their studies in any university because they are just tired of this programme.”

When contacted, the secretary of Chibok Parents Association, Lawan Zannah urged the federal government to keep its promise and ensure the release of the remaining 112 girls still in Boko Haram captivity, saying parents could not describe the pain they endured in the last seven years.

He believed that the government had been fair to the freed girls by sponsoring their education and upkeep at the AUN to prepare them for the final O level examination, which would qualify them for admission into the undergraduate programme, saying the issue now was the fate of 112 girls who remained in the forest.

7 Years After Abduction: We Want To See Our Daughters Before We Die – Chibok Parents