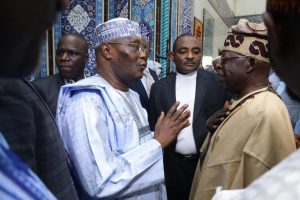 The leader of INRI Evangelical Spiritual Church, Primate Elijah Ayodele has warned the national leader of the All Progressives Congress (APC), Asiwaju Bola Tinubu against contesting the 2023 presidency.

This is as he warned that Tinubu is only being deceived by sycophants and has not done enough to become Nigeria’s next president.

Ayodele added that if Tinubu goes ahead with his 2023 presidential ambition, he would be disgraced and molested.

He said: “Let Atiku go and rest while Tinubu should consult God for him to survive till that time in good health.

“Tinubu is very desperate to become Nigeria’s president at all cost, he should be conscious of his health implications and should be aware that he has to seek the face of God if he wants to further because so many things are going to happen in the process.

“Tinubu is risking his life for opting to run in the next election. PDP may break because of Atiku.

“These two people; Atiku should go and take his rest and Tinubu is risking his life, he will be molested, embarrassed.

“I tell you they will drag Tinubu the way they dragged Abiola, he has not done what is right for him to contest for 2023 presidency.

“Some people are just hailing him but he will goof in so many ways. He is a good man to rule Nigeria but not divinely nominated. He is being deceived,” Ayodele told Daily Post.

While both Atiku and Tinubu are yet to officially declare their 2023 presidential ambition, Naija News understands their supporters are already gearing up for their candidacy.

Meanwhile, the national leadership of the Peoples Democratic Party (PDP) has backed moves by the minority caucus in the National Assembly to impeach President Muhammadu Buhari.

Naija News had earlier reported that the Minority Caucus of the National Assembly expressed readiness to impeach President Buhari if he should continue to breach the constitution.

This was made known to newsmen on Tuesday by the leader of the caucus and Senate Minority Leader, Enyinnaya Abaribe.

He stated that Buhari has failed to guarantee the primary purpose of the government, which is security and welfare.

2023: Why North Will Choose Tinubu Over Atiku – Suleiman

2023: Prophet Arogun Reveals Who Will Succeed Buhari In Prophecy

2023: There Will Be No Elections – Nigerian Prophet Predicts

2023: Tinubu Speaks On Buhari Elongating His Tenure In Office